Last year, I spent three months in Japan. I’ve lived there before but I’d never travelled the northeast coastline. I leapt at the chance to catch train after train all the way up from Tokyo through Sendai, Matsushima, Hachinohe, Hakodate, deep into Hokkaido, and along the way, a clutch of fishing towns whose names are now all over the news.

Just last week, I picked up the verse novel I started writing in Japan, thinking it was high time I got back to it. This morning, trawling through the stream-of-consciousness jottings I made on my travels, I came across these fragments:

piles of coloured balls – fishing floats. The beach is grey and stony, no sand as such. dotted with colourful balls that look like baubles, decorations, children’s toys, as if some party has left its

detritus – colours are bleached, faded, the jaded aftermath of a party somewhere far out at sea, washed up on this lonely shore.

There’s no surf here, no waves, – the ocean lies flat and docile – here and there ‘be careful of tsunami’ signs seem almost cartoonish, their over-excited exclamation marks jarring in this featureless grey. what a shock it would be if something were to rise out of this.

There seems no clear division btwn land and ocean – sand the colour of dirt as if the ground simply continues – no waves and no change in level. It doesn’t feel like a different state, just a continuation. Water, land, water land, a line that might blur at any moment, a line that isn’t a line, 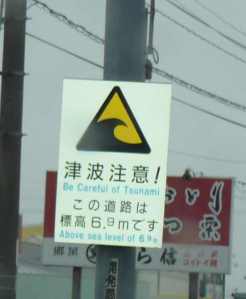 always this lapping, the gentle knocking. The signs speak of a different insistence but could it really turn, this present calm?

At times, the train runs right along the coast, the water only a few feet from the window and nothing else in btwn, you could dive from the windows if you wanted to. I want to. But also want this, this journey, this onward and onward carrying away of self into elsewhere. From here, you can see the seawall – a series of jagged cement blocks, like unstraightened teeth, piled upon each other – black, wild, bleak. Some are patterned, others in random piles, bits of broken stones like they will throw whatever they can at the barely perceptible border to keep the unconcerned sea in its place. As they break down their edges wear so they become rounded, look like dissolving, pockmarked starfish.

With every shift of light, every promise of ocean, every head tilts subtly sideways. People will always turn to look at water.

There are no words for what has happened. Checking in with one of my host families, I felt perversely that this was the most important thing for me to be able to say in Japanese. That there are no words. That they are not up to the task.

I’m wary of feeling connected. It’s not my tragedy. I am not suffering. I recognise, and despise, that impulse to insert oneself sideways into it, to lay claim to a personal stake. I don’t mean to do that. I’m not sure what I’m doing, exactly. It may be as simple as All I have are these words. Here.

And I don’t know what to say about the media, about the endless bombardment of images, the piling of video upon photograph upon ‘miracle’ upon ‘tragedy’. There’s a part of me that wants to say, stop! and to what purpose? and enoughenoughenough, that says it’s not about information or education or bearing witness, at least in any productive sense. There’s a part of me that can’t help quoting Sylvia Plath, yet again:

Compelled by calamity’s magnet
They loiter and stare as if the house
Burnt-out were theirs, or as if they thought
Some scandal might any minute ooze
From a smoke-choked closet into light;
No deaths, no prodigious injuries
Glut these hunters after an old meat,
Blood-spoor of the austere tragedies.

Mother Medea in a green smock
Moves humbly as any housewife through
Her ruined apartments, taking stock
Of charred shoes, the sodden upholstery:
Cheated of the pyre and the rack,
The crowd sucks her last tear and turns away.

2 thoughts on “Fragments From a Coastline”