Back in July, I was surprised to find my novel Surface Tension on the longlist for the Children’s/Young Adult Fiction category of the Davitt Awards, which are presented annually for crimewriting by Australian women.

The reason I was surprised is simply that across the many, many drafts I did of that book, I never once realised that what I was writing would fit into that genre. I was really just exploring an image, and shaping the sort of narrative that seemed to flow naturally from that process. When the longlist came out, I said, Huh? Really? Cool. And then I called my mother, because she is possibly Australia’s most avid reader of crime fiction, and I knew she’d get a kick out of it.
It was a long longlist, full of great books, and I never imagined I’d get any further. Then in August, the shortlist was announced, and it was somewhat shorter. Three books. And mine was one of them.

I had to call my mother again.

Then on Saturday, the winners were announced at an awards ceremony in Melbourne. And so I can now reveal the gobsmacking news that Surface Tension has won.

I was unfortunately unable to attend due to ongoing Book Week commitments, but the award was accepted on my behalf by crime (and children’s) writer Liz Filleul, to whom I’m very grateful. To quote just a little from the judges’ comments, which have left me with a lovely glow:

Surface Tension is a sublimely beautiful book. This stunningly written book was a stand-out for the judges, and the decision was unanimous.

One of the questions I’m often asked during Book Week is which of my books is my favourite. I know it’s standard writer policy to make analogies with choosing favourite children and say, you know, I couldn’t possibly. But I do have favourites. And Surface Tension is one of them, for a few reasons:

* It was really difficult to write. I am not a plotter. And given that this is effectively a mystery novel, the plotting needed to be very carefully managed. There were many times when I almost gave up. [If you’re interested, I wrote about that here and here] 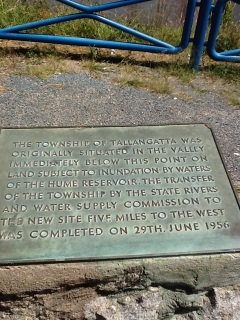 * I feel like I achieved something I love to aim for – a balance of story and idea/image/poetic language. I think it’s a good read – things happen, you know? and that’s something for me – but it’s also sort of quiet and thoughtful, reflective, and a bit odd. All those things matter to me.

* It’s a story that had its beginnings a long time ago, in a single, compelling image, and that’s really what I love to write out of. When I began the story, what I set out to do was explore an image that had slept in the back of my mind for some 25 years – that of a drowned town and the secrets it might hold. It was on a high-school camp to the town of Tallangatta in north-eastern Victoria that I stood on the shore of a lake and looked down to see the edge of a road, exposed by drought and weather. And who can stumble across a hidden road without wondering where it might lead? If you think about the image, it makes sense that it turned into the sort of novel it did.

So I think Surface Tension will always be a favourite of mine and I’m thrilled to see it acknowledged in this way.

I must thank the Sisters in Crime, who sponsor the Davitt Awards. Thanks for letting this interloper sneak into the proceedings; I’m only sorry I couldn’t be there in person.

And as I’ve said elsewhere, the book would not be the book it is without the editorial insight of Sue Whiting, who somehow always manages to work out what I’m trying to say, and pushes me to find ways of saying it better. I’m very grateful to her, and also to the Western Australian Department of Culture and the Arts, for a Development Grant which afforded me three months of precious writing time to complete the first draft of the manuscript. There’s a very good chance that without the responsibility I felt to the taxpayers of Western Australia, I may never have pushed through the problems I was having to bring the book to completion. I’m not sure that’s how grants are supposed to work, but it was certainly effective for me!

In short, I’m delighted. In long, everything I’ve just said. Now all that remains is for me to call my mother…