Once, there was a girl called Meg. She was a reader and a collector of fragments – pithy observations, random snippets of stuff. She liked scribbling things down, twisting words about, but she was not a writer.

One day she was driving with her four-year-old daughter and her daughter’s same-aged friend, “E”, in the back. She was driving E home after a sleepover and she started messing about, being silly. Is this where I turn, E? Or the next corner? Wait … are we on the right street? Oh, no! I think we’re lost!

Because everyone knows that four-year-olds love whimsical play. But E rolled his eyes and said, in a world-weary tone, “You know where my house is.”

Meg thought it was a shame for a four-year-old to be world-weary, so she tried again, with this: “Well, I know where it was yesterday, but who’s to say where it will be today?”

She started spinning a story about a house that had legs folded beneath it, a house which got up at night and roamed restlessly through the streets so that the people who lived there never knew where they were going to wake up the next morning.

And while E continued to roll his eyes, she started thinking, Huh. I wonder if that could be a picture book.

So she wrote one. It was 2200 words, an excellent length for a picture book. And she sent it

off to a publisher. And got a letter back saying, This is lovely. Here is a readers’ report with some suggestions for revision [hint: fewer words!]. With some changes, we think this might find a place on our list.

And she thought, Huh. That was easy.

She revised it. And revised it again. And eventually the publisher said they loved it but they had decided to change the direction of their list (which Meg could only interpret to mean away from you!) and Meg thought Well, that doesn’t matter. I’ll just send it to another publisher. And she did, and then sent it to another and another and another, and rewrote it as a chapter book and an Aussie Bite and an Aussie Nibble and a shorter picture book and a longer picture book and briefly wondered whether it could be somehow shoe-horned into a YA dystopian. She sent it all over Australia and to the US, amassing a bulging file of rejection letters. Along the way, she received a piece of feedback that would pithily sum up much of her work for years to come:

Eventually, Meg filed the manuscript in the metaphorical

bottom drawer. Oh, well, she thought. It was a learning experience. It had taught her about drafting and about editing; it had taught her not to be precious about the words on the page. These were good lessons to have learned, because by now, she had the writing bug; she kept getting ideas and she kept scribbling them down. Some of them were beginning to look like stories. Eventually, one got published, and then another.

Seven books later, Meg was invited to speak at the CBCA WA’s Book Week Opening Dinner. She was asked to speak about her writing journey, her path to publication. In the course of doing so, she talked about the story that had started it all, and how what was a disappointment at the time had turned into A Valuable Lesson.

Cate Sutherland from Fremantle Press was in the audience. After dinner, she tapped Meg on the shoulder and said, “I want you to send me that manuscript.”

Meg shook her head. “Fremantle Press has already seen it.”

Cate shook her head more firmly. “But I haven’t seen it. Please send it.”

By this time, Meg had some experience working with publishers. She knew she would never win the head-shaking arms-race. She did as she was told. 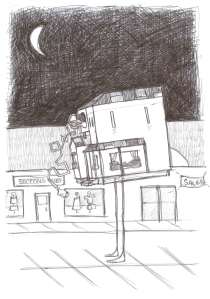 In September this year, some 14 years after Meg first wrote the first draft and set herself on the long and winding path to becoming a children’s writer, Bella and the Wandering House will be a book.

Sometimes all a story needs is the intervention of the right editor at the right time.

And that is the tale of Meg and the Meandering Manuscript. I do love a happy ending.

7 thoughts on “Meg and the Meandering Manuscript”