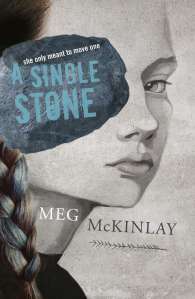 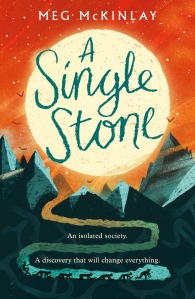 Every girl dreams of being part of the line – the chosen seven who tunnel deep into the mountain to find the harvest. No work is more important.

Jena is the leader of the line – strong, respected, reliable. And – as all girls must be – she is small; years of training have seen to that. It is not always easy but it is the way of things. And so a girl must wrap her limbs, lie still, deny herself a second bowl of stew. Or a first.

What Readers Are Saying:

‘… ranges from dystopia to historical fiction and even, at times, a sci-fi influenced otherworldly setting, but it comes together in unexpected and deeply satisfying ways. […] In addition to the book’s compelling story, McKinlay’s writing style is brilliantly poetic and spare, a perfect fit for this world …’
– The Bulletin of the Center for Children’s Books

‘… an engaging, beautifully written novel that manages to pose big questions about gender and power, and thoroughly entertain. This is a quietly powerful, polished story for readers aged eight and above.’
– Frances Atkinson, Books+Publishing

‘… limned in spare prose but completely convincing, and an original setting that is specific in its every detail and mythic in its effect. The first sentence induces claustrophobia, and it never lets up as tension builds.’
– Sarah Ellis, The Horn Book Magazine

‘A Single Stone is a beautiful and delicate novel that tackles some big questions about gender and power in an interesting manner, entertaining the reader. With body image, women’s roles in society, and government corruption all part of this powerful novel hopefully this book gets young adults talking about these important issues.’
– Katherine Dretzke, Readings

‘This beautifully written, haunting novel warns of the consequences of blind following, and shows the important difference between appearance and truth. This is award-winning McKinlay’s best yet.’
– writingWA

‘A beautifully written, quiet adventure that takes you spelunking into questions of gender and power.’
– Michael Earp, Goodreads

“The Alchemy of Story”, Book Page: Behind the Book

This is an odd one, even for me, and it’s difficult to put my finger on how the story came together. But as with much of my work, it began from the alignment of several unrelated ideas.

I can say that the original inspiration was probably this quote from Franz Kafka’s The Zurau Aphorisms, which was one of those books I clutched fervently as a teenager:

Leopards break into the temple and drink to the dregs what is in the sacrificial pitchers; this is repeated over and over again; finally it can be calculated in advance, and it becomes a part of the ceremony.

This notion – of something inherently random and meaningless coming to take on significance, and being embedded into ritual – is something I’m really interested in. As a teenager in an Anglican high school, I often found this phrase running through my head during communion services.

Also important was my memory of reading CS Lewis’ The Silver Chair as a young child. When Jill, Eustace and Puddleglum make their way underground, they meet some gnomes who come from Bism, a world far below. The gnomes express their horror of the ‘Overland’ world, saying things like:

They say there’s no roof at all there; only a horrible, great emptiness called the sky.

… why don’t you come down to Bism? You’d be happier there than in that cold, unprotected, naked country out on top.

Reading that at the age of about seven shifted my thinking in a fundamental way. It made me reflect on a way of being in the world I had taken for granted as being right and true, maybe even the only way. It made me think about difference, to wonder what it would feel like to have grown up in Bism. And years later, it made me imagine a girl who felt at home underground, in tight spaces, who was so comfortable there she felt ill at ease outside, with nothing pressing upon her. And from there to wonder why she would be underground, surrounded by stone … and whether those feelings were truly her own or something she had been taught from such an early age they now seemed natural and true.

At some point, with all this humming away in the background, the vaguest of ideas began to form: something about a society in which girls were kept small – via diet and a kind of regimen of wrapping or binding – in order to tunnel into mountains. The next question of course is Why would they do that? and at this point I started thinking perhaps this might be a story, and sat down and did some brainstorming. I came up with the idea that there would be something deep in the mountain that was important for the survival of their community, and mythologies that had arisen about the ways in which it could be harvested because of past calamities (which of course connects to Kafka and the leopards). Because of this, it falls to the girls to do that work, which is seen as an honour, which in turn means that staying small and lean becomes something to strive for.

That led me to start thinking about things like footbinding and body dysmorphia and the general societal pressure on girls to conform to a certain body-type. As the story began to develop, I had those ideas firmly in mind, sitting alongside those earlier thoughts about ritual and religious doctrine and how fundamentalism works.

From that point, it was a simple matter of several years and approximately one hundred drafts! It’s still a surprise to me that I’ve managed to wrangle all of this into the shape of a story I’m happy with; I can only hope that readers are happy with it too.