Even secrets have a way of floating to the surface.

It’s the seven bandaid swim that clinches it. It’s what convinces Cassie that there is no way she’s going to swim at the local pool any longer. From now on she is going to swim in the lake. The lake covers Old Lower Grange, which was purposely drowned on the day Cassie was born. That day was important for everyone, especially Liam, a boy who joins Cassie at the lake. As summer heats up, the water level of the lake gets lower and lower. Slowly the dark secrets of Old Lower Grange are uncovered and soon, both their lives will change – forever.

What Readers Are Saying:

‘Surface Tension is a wonderfully layered story – reading it is like being gradually immersed in a pool of water as each layer of the narrative slowly washes over you. The idea of the sunken town of Old Lower Grange is enthralling … There isn’t a dull moment in this book. The story is full of human connections that will delight readers and there is a whimsy to the text that makes it a great read for all ages, although it is ideally suited to upper primary readers..’
– Bec Kavanagh, Books+Publishing

‘This is most definitely on my list of favourite kids’ books so far this year …  Original, gripping, poetic, authentic – a book that kept me reading far longer than I should have at each sitting … a stunning novel.’
– Megan Blandford, Kids Book Review

‘Meg McKinlay made me nostalgic for the days when I loved reading Nancy Drew and Trixie Belden … [the author] has done a wonderful job of inventing a fresh, original, suspenseful and intriguing story in Surface Tension, that will have you hooked to the very last page.’
– The Book Griffin

‘Original, taken, poetic, authenticates – it is the words during which spout out to occupy itself and after the surface tension off reading, has book which maintained reading to me much to skirt than I should cuts with each meeting. It off the words inspires the thought, the question and the emotions which will remain with the long readers then who final page. I almost boat await my infant to grow thus I edge divide this one with it.’
– Explanation here

Blog Interview about Below

Images of other ‘drowned towns’

The seed for this story was planted a very long time ago. When I was in Year 7, my class went  on a camp to a town called Tallangatta, in north-eastern Victoria. Tallangatta is near Lake Hume and was actually drowned in the 1950s to make way for the expansion of the lake. When we were there, the water was quite low, and you could see some of the remnants of the old town above the surface, including the beginning of a road that led down into it. I remember being taken by the idea of setting off along the road and following it underwater all the way into the town. It doesn’t make sense, but because there was a road, it felt possible somehow. That image sat in the back of my mind for years until one day the line The day that I was born, they drowned my town came to me, and the rest of the story slowly built itself around that. 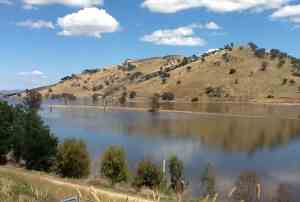 Other connections to my own life include:

The images below are from an article I clipped from a newspaper way back when I first started thinking about the story (the article is not about Tallangatta but about Adaminaby, a town in NSW which met a similar fate; there are towns like this all over the world). I particularly love the anecdote recounted by a woman named Anne Kennedy about how her father, opposed to the flooding, tried to chase the authorities with a gun. I don’t have an incident like that in the book, but did try, via Cassie, to honour that sense of attachment to place, to point to some of the debates that must have raged around these sorts of proposals, and the ways in which official histories can erase or smooth them over.

The writing of this book was supported by a Development Grant from the Department of Culture and the Arts, Western Australia, for which I am immensely grateful.