As many of you know, I have a new picture book coming out very soon.

Once Upon a Small Rhinoceros will officially hit bookstores on 1 September. I’ve blogged previously about the inspiration for the book, and a little about the process of writing it. During that process, many things changed. Some were big – like the title. Others were small – a shift in phrasing that made a line sing, an ellipsis that opened up the ending.

And there was one that was both – tiny but enormous.

Here’s the last line as it appeared in one of the roughs:

If you’ve read the book, you should be able to spot the difference. If you haven’t, then know this: across many, many drafts, and until quite late in the process, my small rhinoceros was male. And then at a certain point, I said huh?

Because my small rhinoceros was male for no good reason. For no reason at all except that I had unconsciously defaulted to that without a moment’s thought.

When I realised this, I was shocked. Being female, I have some skin in this particular game. I’m pretty damn enlightened, if enlightenment is even what’s required here. I have a PhD in feminist literary theory. I have taught women’s studies. And I had given this no thought whatsoever.

I said to my editor, Stop the presses!

And then I gave it some thought whatsoever. I turned my rhinoceros into a female, just to see how I liked it. To see if it changed things.

Reader, it changed everything. It gave the story new layers. It connected me with the story in a deeper way. It gave me the opportunity to use the phrase ‘rhinosplaining’ when talking about the way the older rhinos speak to the small rhinoceros. 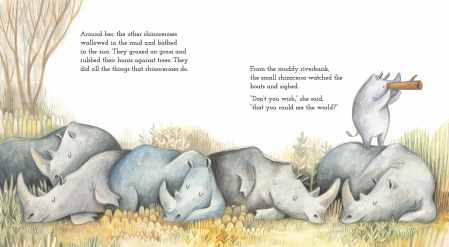 I am so glad I changed it. Utterly chagrined that it very nearly wasn’t even a question.

And now the book is almost out, and being read by other people, and getting reviews, I’m something else. I’m stunned at how intransigent ‘he’ seems to be, despite the fact that it isn’t even in the book.

People read the story – they read ‘she dreamed’, ‘she waved as she sailed around the bend’, ‘she trailed a hoof in the water’, and numerous other gender-specific lines. And then they sigh and hand it back to me and say, “Oh, gorgeous. I love the way he …”

And I say, STOP RIGHT THERE, MY FRIEND!

This book currently has two reviews on Goodreads and one of the reviewers, despite having presumably paid close attention to the book, refers to the rhinoceros as ‘he’.

I read the book to kids in schools and then ask for a show of hands as to whether the small rhinoceros is male or female. And without fail, at least 50% think she’s male.

I wonder whether it’s simply because she’s intrepid and adventurous. Because she does stuff and goes her own way. I’ve had boys tell me girls can’t use hammers, build boats – She isn’t strong enough to carry all that wood! She’d be too scared by herself! If a girl built that boat it would definitely capsize!

I’ve had girls grin quietly and argue loudly. I’ve had fantastic discussions with kids of all ages, nudging them towards confronting their own unconscious biases.

I am loving the whole damn thing.

3 thoughts on “A Rhinoceros By Any Other Gender…”