… would be the name of my book launch, if I was having one. Which I’m not, even though Frané Lessac is standing by to dress up as anything I so choose.

Despite the allure of Frané in a duck costume or a penguin outfit, or possibly both in rapid succession like the quick-change artist she definitely is, I won’t be having an actual launch event this time, but two books will nonetheless be launched onto an unsuspecting picture-book-reading public.

One book about a duck. The other about penguins.

The eight-years-ago penguin book was The Truth About Penguins. The this-year-almost-exactly-right-now penguin book is The Penguins Are Coming!, which eagle-eyed readers will notice is same-same-but-different. It’s a re-issue, which means it has a fancy new cover, a fancy new title, and a few fancy little internal changes, but is essentially the same book I had so much fun introducing kids to back in 2010. The great thing about kids is that every few years you have a whole new audience; I’m looking forward to dusting off my stuffed penguin and doing the whole thing again! 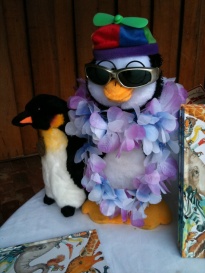 The Penguins Are Coming! is illustrated by Mark Jackson and published by Walker Books. It will be out in June and you can read more about it here.

As for DUCK!, this one is brand spanking new and I’m practically brimming with glee over it.

In my previous post I mentioned how the idea for DUCK! came in part from an old newspaper article I came across while researching another book.

But of course, it’s never just one thing. For me, a story almost always comes from the intersection of at least a couple of unconnected things. They bump together in the chaotic mess of my mind and at some point, I go huh!

For this book, they were: 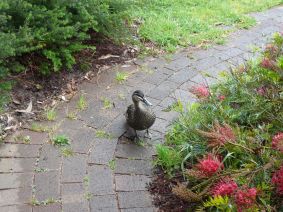 Firstly and most obviously, my enduring love of ducks. Ducks are always on my mind – partly because I grew up with a love of Leunig and his whimsical Mr Curly; partly because I live around the corner from a large park and often wake up to find ducks on my doorstep looking as if they have something they want to tell me; and partly because ducks are plain and simply glorious.

Secondly, Mo Willems‘ wonderful pigeon. Specifically the spread in Don’t Let the Pigeon Drive the Bus, where he throws the mother of all toddler-style tantrums and yells LET ME DRIVE THE BUS! I never visualise anything when I’m writing but I definitely had Mo Willems’ tantrum-throwing pigeon in my head when I wrote one particular line in this book. The illustration notes for that page included the phrase “The duck totally loses his shit”, which I suspect is a first in the history of children’s literature.

Thirdly, and finally but probably most importantly, because I remember very clearly what it felt like to be a small person with lots to say but not always someone willing to really listen. I suspect this is something common to most kids and I try to be on their side as much as I possibly can. I was really happy to be able to sneak that little bit of propaganda into my dedication.

I love the way this book has come together and can’t wait to introduce it to kids. It’s really apt that it’s being released in conjunction with The Penguins Are Coming!, because for me both books are about the power differential between kids and adults in a way. I didn’t realise this until very recently but clearly it’s something that matters to me a fair bit, something I’ve carried with me from my childhood.

DUCK! is a super-fun read-aloud picture book which tells the story of a small but determined duck who disturbs the peace in the farmyard one day when he bursts onto the scene apparently shouting out his name. But is that really what Duck means?

DUCK! is illustrated by Nathaniel Eckstrom and published by Walker Books. It will be out in July and you can read more about it here.