In December, Sue Whiting tagged me in “The Next Big Thing” book meme which has been doing the rounds. It was Christmas, and I was on holiday. I said, “Thanks, but no.”

In January, Nicole Hayes tagged me again. It was the New Year and I didn’t want to start 2013 off with “busy work”. I said, “Thanks, but no.”

So let’s file this one under attrition, war of. Or perhaps it’s more that Amanda Curtin happens to have caught me on a day when I’ve given up on achieving anything other than small fragments of ‘stuff’.

So here is one such piece of stuff. The meme asks writers to answer ten questions about their forthcoming work. So that’s what I’ve done. It does seem that I’m a bit constitutionally averse to things like this, and don’t do very well at disguising that. If you detect essence of curmudgeon in any of these responses, that’s the reason.

1. What is the working title of your current work-in-progress/next book?
Definitely No Ducks! It’s a sequel to Duck for a Day.

2. Where did the idea come from? 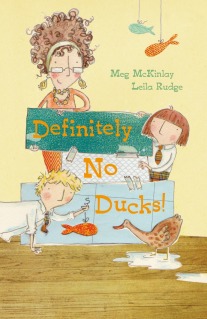 Unfortunately, I’d run out of ideas. So after racking my brain, the best I could come up with was a mash-up of Duck for a Day and No Bears. The book after this is going to be called Wreck the Ten Tiny Things.

Actually, the idea flowed quite naturally from Duck for a Day. I liked the characters I had written and wanted to spend more time with them, especially Noah. The logical next step for the story was that the happy status quo set up at the end of Duck for a Day came under threat. So that’s what I began with.

3. What genre does your book fall into?
Realist fiction, with a twist of duck. Audience-wise, it’s a chapter book, aimed at ages 6-9-ish.

4. What actors would you choose to play the part of your characters in a movie rendition?
I’m not a visual thinker and never consider such things, so I honestly have no idea. There is a duck in my local park who would make an excellent Max, though.

5. What is the one-sentence synopsis of your book?
When Max, the class duck, is blamed for destroying the Antarctica display, it’s up to Abby and Noah to uncover the truth; if they can’t, they’ll have to say goodbye to Max forever.

6. Will your book be self-published or represented by an agency?
It will be published by Walker Books in March 2013.

7. How long did it take you to write the first draft?
My blog tells me I started planning it in mid 2010, panicked in November 2010 when I realised my ‘plan’ consisted of the words: “Chapter 1: The thing happens with the ting”, and finished the draft in August 2011. 8000 words. 8 months. I am emphatically not a fast-drafter!

8. What other books would you compare this story to within your genre?
There’s this lovely little book called Duck for a Day that’s kind of similar. I don’t know though. I think this is better.

9. Who or what inspired you to write this book?
The original urge to write about a duck came from the cartoonist Michael Leunig. I was taken with an interview he did with Andrew Denton years ago and a duck character began growing in my mind. During that interview Leunig says, wonderfully, “I think a nation is in trouble that cannot accept a duck” and there is a faint echo of this phrase in Definitely No Ducks!

10. What else about the book might pique the reader’s interest?
I imagine that might depend on who the reader is and what their interests are, and how pique-able they tend to be … but I think perhaps it may be interesting to note that this is probably the first book ever to feature a duck disguised as a penguin.

Market research was divided as to whether penguin-lovers or duck-lovers are the bigger book buyers so I decided to hedge my bets. Mass appeal is very important in these difficult economic times.

****
And now it is my turn to pass the baton to four other writers in the hope that they will tell us about their next big thing. However, curmudgeon-style, I am tagging three, because there are only so many writers to go around and if someone doesn’t start to draw this thing to a close, eventually it will begin eating itself. Your turn: James Foley, Norman Jorgensen, Tim Pegler.