Yes, I know he isn’t exactly Mr Curly. That would be like saying I’m Ruby, or Cassie, or possibly even Max.

But last weekend at the Perth Writers Festival, I met the maker of Mr Curly and of many things duckish and otherly delightful – Michael Leunig. I’ve made no secret of the fact that the original inspiration for Duck for a Day came from an interview Leunig did with Andrew Denton, but beyond that, I’ve been a long-time fan of Leunig’s work, which my father shared with me from a very early age. The corkboard above this very desk is dotted with tattered Leunig cartoons, snipped from newspapers here and there over the years.

END_OF_DOCUMENT_TOKEN_TO_BE_REPLACED

In December, Sue Whiting tagged me in “The Next Big Thing” book meme which has been doing the rounds. It was Christmas, and I was on holiday. I said, “Thanks, but no.”

In January, Nicole Hayes tagged me again. It was the New Year and I didn’t want to start 2013 off with “busy work”. I said, “Thanks, but no.”

So let’s file this one under attrition, war of. Or perhaps it’s more that Amanda Curtin happens to have caught me on a day when I’ve given up on achieving anything other than small fragments of ‘stuff’.

So here is one such piece of stuff. The meme asks writers to answer ten questions about their forthcoming work. So that’s what I’ve done. It does seem that I’m a bit constitutionally averse to things like this, and don’t do very well at disguising that. If you detect essence of curmudgeon in any of these responses, that’s the reason.

END_OF_DOCUMENT_TOKEN_TO_BE_REPLACED

Last week I posted about having submitted the draft of a follow-up to Duck for a Day.

Just after that, I experienced another of those curious alignments of which I am so fond.

It was about two years ago that I finished the revisions on the first Duck and the day after sending those off, I woke up to find a duck on my doorstep. At the time I wondered:

And if so, what does it mean?

END_OF_DOCUMENT_TOKEN_TO_BE_REPLACED

Today I moved from one state to another.

Today I moved from this … 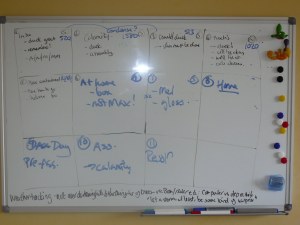 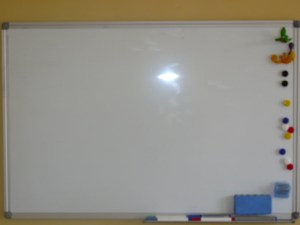 From a whiteboard covered in scenes and scribble to one covered in nothing but possibility.

END_OF_DOCUMENT_TOKEN_TO_BE_REPLACED

I did promise the occasional dash of random and I’m not sure I’ve really been delivering. To rectify that, here are two completely unrelated things:

Surface Tension came out this week. This is excellent and I’m thrilled to see it on shelves. I’m told it received “a cracker of a review” in Bookseller + Publisher, though I’m yet to see it myself. As you do when you have a shiny new book, I’ve taken to picking up a copy, opening it, reading a few lines, sighing, and putting it back down.

Shall we call it Shiny New Book Syndrome? It is an identifiable disorder – I’m sure of it.

END_OF_DOCUMENT_TOKEN_TO_BE_REPLACED

I’m starting a new novel. A chapter book, to be precise. To be even more precise, a follow-up to Duck for a Day, whose characters I love altogether too much to leave alone.

Eventually, we got there.